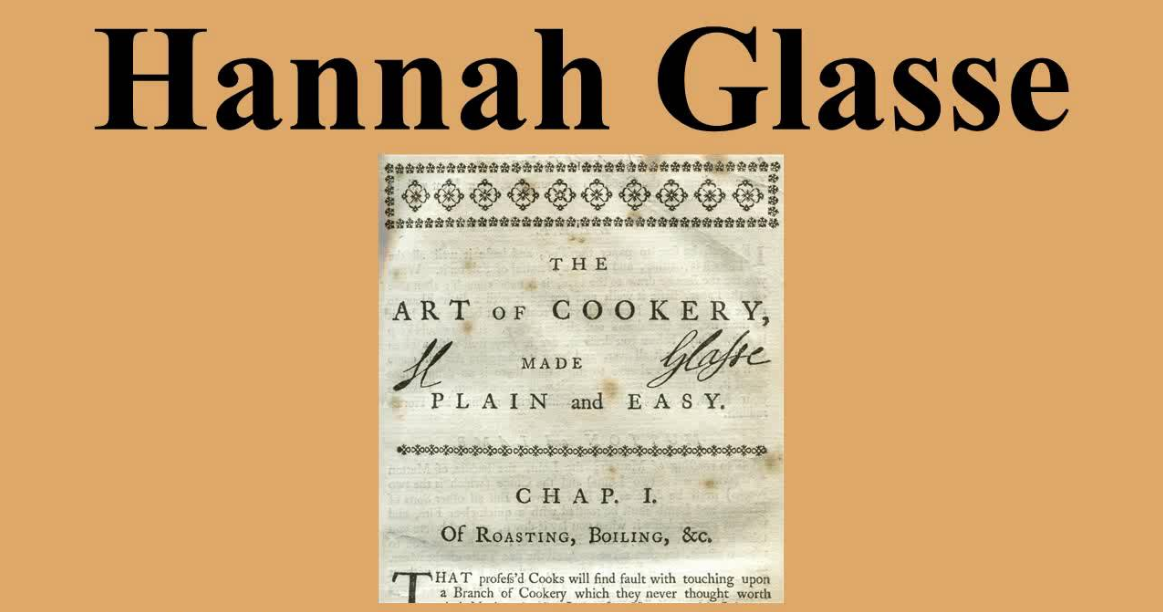 Hannah Glasse (March 1708 – 1 September 1770) was an English cookery writer of the 18th century. Her first cookery book, The Art of Cookery Made Plain and Easy, published in 1747, became the best-selling recipe book that century. It was reprinted within its first year of publication, appeared in 20 editions in the 18th century, and continued to be published until well into the 19th century. She later wrote The Servants’ Directory (1760) and The Compleat Confectioner, which was probably published in 1760; neither book was as commercially successful as her first.

Glasse was born in London to a Northumberland landowner and his mistress. After the relationship ended, Glasse was brought up in her father’s family. When she was 16 she eloped with a 30-year-old Irish subaltern then on half-pay and lived in Essex, working on the estate of the Earls of Donegall. The couple struggled financially and, with the aim of raising money, Glasse wrote The Art of Cookery. She copied extensively from other cookery books, around a third of the recipes having been published elsewhere. Among her original recipes are the first known curry recipe written in English, as well as three recipes for pilau, an early reference to vanilla in English cuisine, the first recorded use of jelly in a trifle, and an early recipe for ice cream. She was also the first to use the term “Yorkshire pudding” in print.

Glasse became a dressmaker in Covent Garden—where her clients included Princess Augusta, the Princess of Wales—but she ran up excessive debts. She was imprisoned for bankruptcy and was forced to sell the copyright of The Art of Cookery. Much of Glasse’s later life is unrecorded; information about her identity was lost until uncovered in 1938 by the historian Madeleine Hope Dodds. Other authors who plagiarised Glasse’s writing and pirated copies became common, particularly in the United States. The Art of Cookery has been admired by English cooks in the second part of the 20th century and influenced many of them, including Elizabeth David, Fanny Cradock, and Clarissa Dickson Wright.

Boiled, skinned, potatoes mashed very smooth with milk, butter or cream and salt and pepper. First known in Glasse 1747, who uses a pint of milk and ¼lb butter to two pounds of potatoes.

Mashed potatoes.
BOIL your potatoes, peel them, and put them into a sauce-pan, mash them well; to two pounds of potatoes put a pint of milk, a little salt, stir them well together, take care they don’t stick to the bottom, then take a quarter of a pound of butter, stir it in, and serve it up.

The Art of Cookery was the dominant reference for home cooks in much of the English-speaking world in the second half of the 18th century and the early 19th century, and it is still used as a reference for food research and historical reconstruction. The book was updated significantly both during her life and after her death.Hannah Glasse’s signature at the top of the first chapter of her book, 6th Edition, 1758, in an attempt to reduce plagiarism

Early editions were not illustrated. Some posthumous editions include a decorative frontispiece, with the caption

The FAIR, who’s Wise and oft consults our BOOK,
And thence directions gives her Prudent Cook,
With CHOICEST VIANDS, has her Table Crown’d,
And Health, with Frugal Ellegance is found.

Some of the recipes were plagiarised, to the extent of being reproduced verbatim from earlier books by other writers.[1] To guard against plagiarism, the title page of, for example, the sixth edition (1758) carries at its foot the warning “This BOOK is published with his MAJESTY’s Royal Licence; and whoever prints it, or any part of it, will be prosecuted”. In addition, the first page of the main text is signed in ink by the author.

The first edition of the book was published by Glasse herself, funded by subscription, and sold (to non-subscribers) at Mrs. Ashburn’s China Shop.

The Art of Cookery made Plain and Easy is a cookbook by Hannah Glasse (1708–1770) first published in 1747. It was a bestseller for a century after its first publication, dominating the English-speaking market and making Glasse one of the most famous cookbook authors of her time. The book ran through at least 40 editions, many of them were copied without explicit author consent. It was published in Dublin from 1748, and in America from 1805.

Glasse said in her note “To the Reader” that she used plain language so that servants would be able to understand it.

The 1751 edition was the first book to mention trifle with jelly as an ingredient; the 1758 edition gave the first mention of “Hamburgh sausages” and piccalilli, while the 1774 edition of the book included one of the first recipes in English for an Indian-style curry. Glasse criticized French influence of British cuisine but included dishes with French names and French influence in the book. Other recipes use imported ingredients including cocoa, cinnamon, nutmeg, pistachios, and musk.

The book was popular in the Thirteen Colonies of America, and its appeal survived the American War of Independence, with copies being owned by Benjamin Franklin, Thomas Jefferson, and George Washington.

Yorkshire pudding is a common English side dish consisting of a baked pudding made from a batter consisting of eggs, flour, and milk or water. It is a versatile food that can be served in numerous ways depending on the choice of ingredients, the size of the pudding, and the accompanying components of the dish. As a first course, it can be served with onion gravy. For the main course, it may be served with beef and gravy and is part of the traditional Sunday roast, but can also be filled with foods, such as bangers and mash to make a meal.

Yorkshire pudding is cooked by pouring a batter made from milk (or water), flour and eggs into preheated, oiled, baking pans, ramekins or muffin tins (in the case of miniature puddings). A basic formula uses ​1⁄3 cup flour and ​1⁄3 cup liquid per egg. Water produces a lighter crisper but less sweet pudding than using milk. They can also be baked in the oven in muffin tins. A 1926 recipe involves covering the pudding with greaseproof paper to steam it and then serving it with jam, butter, and sugar.