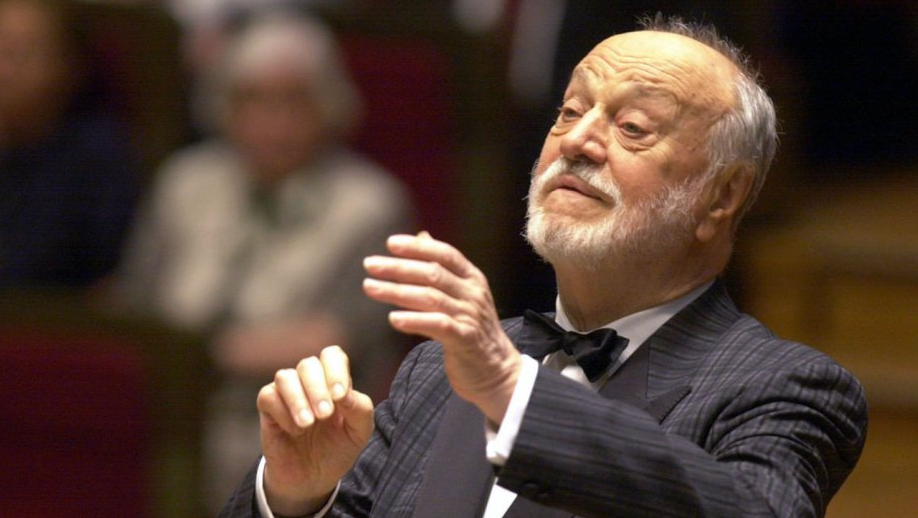 Kurt Masur (18 July 1927 – 19 December 2015) was a German conductor. Called “one of the last old-style maestros”, he directed many of the principal orchestras of his era. He had a long career as the Kapellmeister of the Leipzig Gewandhaus Orchestra, and also served as music director of the New York Philharmonic.

He left many recordings of classical music played by major orchestras. Masur is also remembered for his actions to support peaceful demonstrations in the 1989 anti-government demonstrations in Leipzig; the protests were part of the events leading up to the fall of the Berlin wall.

In March 2002, the President of Germany, Johannes Rau, awarded him the Cross with Star of the Order of Merit of the Federal Republic of Germany; in September 2007, the President of Germany, Horst Köhler, bestowed upon him the Grand Cross of the Order of Merit with Star and Ribbon; in September 2008, he received the Wilhelm Furtwängler Prize in Bonn, Germany. Masur was also an Honorary Citizen of his hometown Brieg. In 2001, Masur became an Honorary Member of the Royal Academy of Music. In 2010, he received the Leo Baeck Medal (Leo Baeck Institute) for his humanitarian work promoting tolerance and social justice. He received a Goldene Henne [de] award in 2014 for his work in public policy.

On 18 July 2018, which would have been Masur’s 91st birthday, Google featured him in a Google Doodle in the United States, Germany, Belarus, Iceland, and Japan.

In 2015, Masur died at the age of 88 in Greenwich, Connecticut, from complications of Parkinson’s disease. His funeral was held in Leipzig, with music played by the Leipzig Gewandhaus Orchestra. Burial took place in the South Leipzig Cemetery, called Südfriedhof. He was survived by his third wife, as well as his daughters Angelika and Carolin, his sons, Ken-David, Michael and Matthias, and nine grandchildren.

In 2015, Masur died at the age of 88 in Greenwich, Connecticut, from complications of Parkinson’s disease. His funeral was held in Leipzig, with music played by the Leipzig Gewandhaus Orchestra. Burial took place in the South Leipzig Cemetery, called Südfriedhof.

Ken-David Masur is a German-born American conductor. Of Japanese and German ancestry, Masur is the son of conductor Kurt Masur and Masur’s third wife, the soprano Tomoko Sakurai. He began piano studies at age 6. Masur was also a boy soprano and sang with the Gewandhaus Children’s Choir at age 9.

Masur left an extensive list of recordings of music by classical composers, conducting major orchestras. His work included a rich repertoire, his most famous recordings include the works of Bruckner, Dvořák, Liszt, Mendelssohn, Prokofiev and Tchaikovsky and the nine symphonies of Beethoven. The latter he played several times with the Gewandhaus Orchestra. Masur also has recordings by Bach, Brahms, Britten, Bruch, Cerha, Debussy, Mahler, Shostakovich, Schubert, Schumann, and Sibelius; but also by Gershwin, whose works he published on vinyl in 1975.

From 1946 until 1948, he studied conducting, composition and piano at the University of Music and Theatre Leipzig. He left at 21, never finishing his studies, when offered a job as répétiteur at the Landestheater Halle an der Saale (since renamed as the Halle Opera House, or Opernhaus Halle in German).

Masur was married three times and had a total of five children. His first marriage to Brigitte Stütze produced three children, two sons, and a daughter, and it ended in divorce in 1966. He and his second wife, Irmgard Elsa Kaul, had a daughter, Carolin Masur, who became an opera singer. Irmgard Masur died in 1972 in a car accident in which Masur was severely injured. In 1975, he married his third wife, soprano and violist, Tomoko Sakurai: they had one son, Ken-David, a classical singer and conductor.

Ms. Mutter leaves little doubt of her current enthusiasm for Mendelssohn in an excellent new recording of that concerto with Kurt Masur and the Leipzig Gewandhaus Orchestra (Deutsche Grammophon CD and DVD). And in this Mendelssohn bicentenary year, she and Mr. Masur will perform the work with the New York Philharmonic at Avery Fisher Hall from Wednesday through Saturday, and with the Dresden Philharmonic in Dresden and Prague in the spring.

Mr. Masur, for his part, has long tried to counter the idea that Mendelssohn’s music lacks depth, an idea that was first promulgated in the 19th century by Wagner, who wrote a vitriolic anti-Semitic treatise stating that Mendelssohn’s Jewish heritage had prevented him from writing great music. When Mr. Masur, 81, was a child in Germany, his piano teacher told him to close the window while practicing the “Songs Without Words,” because the music of Mendelssohn, a baptized Jew, was banned by the Nazis.

Since World War II, Mr. Masur has fought to restore Mendelssohn’s reputation. Mendelssohn, he said, should be given the same respect accorded Bach and Beethoven. As founder and chairman of the International Mendelssohn Foundation, he has been involved in projects like restoring the composer’s house in Leipzig, Germany, as a cultural center.

Mr. Masur suggests that inappropriate interpretations of Mendelssohn’s music have also damaged his legacy. The “Scottish” Symphony (No. 3 in the unchronological standard sequence), he said, is often played in a “harmless” manner, which “is a great mistake, as it’s a very serious and dramatic piece.”

Conversely, performances of the joyous E minor Concerto are often too heavy and Brahmsian, he said. Both Ms. Mutter and the Berlin Philharmonic sound sluggish, dutiful and heavy-limbed on the 1980 recording when compared to the sprightly new release. Ms. Mutter developed her current sweet-toned, buoyant and passionate interpretation with guidance from Mr. Masur.

On the new disc, the Leipzig Gewandhaus Orchestra (which Mendelssohn directed long ago, Mr. Masur more recently) plays with transparency that highlights the composer’s classicism. Ms. Mutter performs with a fervent warmth that results in a particularly vital and glowing rendition of the second movement.

His father was an electrical engineer, and as a young boy he completed an electrician’s apprenticeship; he occasionally worked in his father’s shop. However, Masur’s calling lay elsewhere: in music. From ages 10 to 16, he took piano lessons with Katharina Hartmann. Reportedly, at the age of 16, the little finger on his right hand grew stiff due to an unusually shortened tendon, which hampered his piano lessons. It may have also partially led to his choice of becoming a conductor. His desire to become a conductor was likely cemented in 1943 when he and a friend saw a live performance of Beethoven’s works; the orchestral performance led by Herbert Albert had a great effect on the young Masur. In 1943 and 1944 he took piano lessons at the Landesmusikschule in Breslau, which at the time was part of Germany but is now known as Wrocław in Poland.

However, the events of World War II would soon put a temporary halt to his practicing. As the war dragged on, Nazi Germany’s casualties had been mounting and were leading to a manpower shortage. In response, Hitler’s government instituted increasingly desperate conscription measures. In October of 1944, the Nazis announced that all men between the ages of 16 and 60 could be conscripted, which included the young composer. Masur was drafted into the paratroopers late in 1944. He was sent to fight; “[o]ut of the 150 people of his unit, only 27 [including Masur] survived”, before being captured by American and British forces on May 1, 1945. Masur and his family were lucky: not a single family member died in the war.

I could not find reliable information on Masur’s medical history and have to depend on scattered newspaper reports that mentioned medical episodes. His publicists appear to have actively shielded his medical records. The New York Philharmonic publicity department said that he died at a hospital in Greenwich, Connecticut, from complications of Parkinson’s disease.

On May 22, 1990, the New York Times reported that he was hospitalized at a heart clinic in West Germany after suffering chest pains on a flight from New York to Frankfurt. They said, “He has high blood pressure and a circulatory problem but that he had not had a heart attack.” Another report stated that “in 2002 he returned to the Philharmonic podium just nine weeks after undergoing a kidney transplant.” Diabetes is one of the more common causes of kidney transplants. In 2012 while conducting the Orchestre National de France in Paris, his shakiness from Parkinson’s disease caused him to fall off the podium into the front row of the audience and he broke his shoulder blade. In 2014, he withdrew from his annual birthday concert in Paris with the Orchestre Nationale de France because of his Parkinson’s Disease. That same year he was hospitalized for anemia and canceled concerts because of “visual problems”.

In 2015, Masur died at the age of 88 in Greenwich, Connecticut, from complications of Parkinson’s disease.