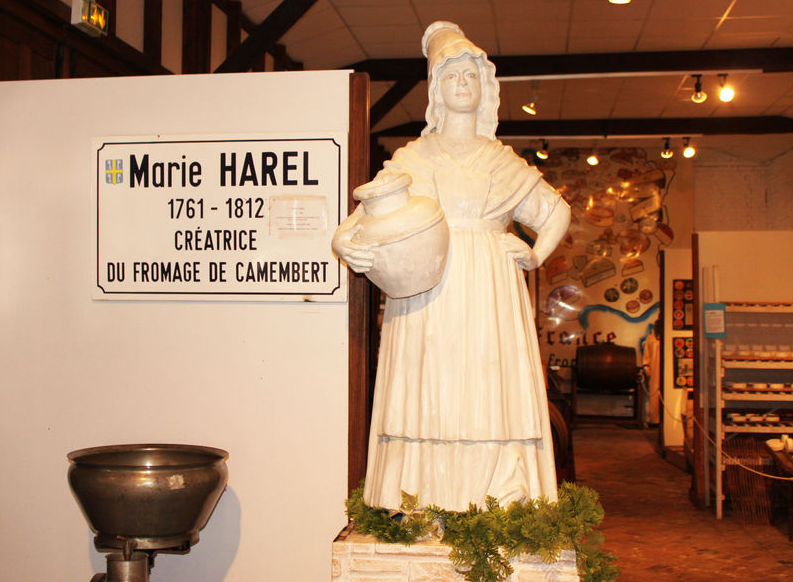 Her main contribution was to have initiated a dynasty of entrepreneurial cheesemakers who developed the production of Camembert cheese on a large scale, notably her grandson Cyrille Paynel, born in 1817, who created a cheese factory in the commune of Le Mesnil-Mauger in Calvados at France.

Who Is Marie Harel

Marie Harel was born Marie Catherine Fontaine on April 28, 1761, at Crouttes (Orne), near Vimoutiers in Normandy. On May 10, 1785, in Camembert, Orne, she married Jacques Harel, a laborer at Roiville. She died November 9, 1844, at Vimoutiers, Orne.

Since the end of the 17th century, a renowned cheese was being produced in the Camembert region of Normandy. In his Geographic Dictionary, published in 1708, Thomas Corneillewrote: “Vimonstiers: […] every Monday a large market is held, to which are brought excellent cheeses from Livarot and Camembert.” However, according to a later legend which appeared at the beginning of the 20th century, the invention of Camembert cheese was attributed to Marie Harel who would have benefited from the advice of a refractory priest, Abbot Charles-Jean Bonvoust, who was hidden in 1796-97 at the Manor of Beaumoncel where she worked. Supposedly, he was a native of Brie and passed along to Marie a recipe for a kind of cheese with a bloomy edible rind, such as was produced in his native area. In reality, Bonvoust came from Pays de Caux. This apocryphal story, for which there is no evidence, is still often accepted as true.

Marie Harel did make Camembert cheese, according to local custom. She initiated a dynasty of entrepreneurial cheesemakers who produced Camembert cheese on a large scale, notably her grandson Cyrille Paynel, born in 1817, who created a cheese factory in the commune of Le Mesnil-Mauger in Calvados.

The success of the production of Camembert in the first half of the 19th century was largely due to the descendants of Harel, who considered themselves the only legitimate users of the designation “Camembert”. However, beginning in 1870, other Norman cheese makers contested this family monopoly.

The town of Vimoutiers had a statue to her. On 14 June 1944, during the Battle of Normandy, Vimoutiers was bombarded by Allied forces. The village was destroyed and 220 people died. 400 people of Van Wert, Ohio contributed in the costs of reconstruction and reparation of the town including the replacement of Marie Harel’s statue in 1953. This is recorded by a plaque in the market square of Vimoutiers.

A legend says that she died in Champosoult, but actually it was her daughter, also named Marie (1781–1855), who died there. Harel was also honored with a Google Doodle on the occasion of her 256th birthday in 2017.

The fresh Camembert cheese is bland, hard and crumbly in texture. Young Camembert has a milky and sweet taste. As the cheese matures it forms a smooth, runny interior and a white bloomy rind that is typical to Camembert cheese. It has a rich, buttery flavor. The rind is bloomy white caused by a white fungus, called penicillium candidum. The rind is meant to be eaten with the cheese.

This cheese is best paired with a light red wine such as Beaujolais, Chenin Blanc, St Emilion, St Estephe or traditionally a glass of Normandy cider.

If not for Marie Harel, born April 28, 1761, brie might have no gooey counterpart. Harel, who’s credited with creating the first camembert in 1791, is said to have encountered a cheese whisperer at the Normandy manor where she worked as a dairymaid. According to legend, a priest (purportedly from the region of Brie) took shelter at Beaumoncel near Vimoutiers during the French Revolution, and he shared his secret for making the now-famous soft-centered cheese. Harel added her own signature, packaging the cheese in its iconic wooden boxes.

Like brie, camembert is made from raw cow’s milk, but without cream. The cheese is yellow in color, with an earthy aroma, creamy taste, and an edible white rind. Today, the only camembert made from unpasteurized milk receives the designation Camembert de Normandie. The village of Vimoutiers, home of the Camembert Museum, boasts a statue of a cow — as well as one of Harel, who made such a delicious contribution to French cheese culture.

Our Doodle celebrates Harel’s 256th birthday with a slideshow that illustrates how camembert is made, step by step. It’s drawn in a charming, nostalgic style reminiscent of early 20th-century French poster artists, such as Hervé Morvan and Raymond Savignac.